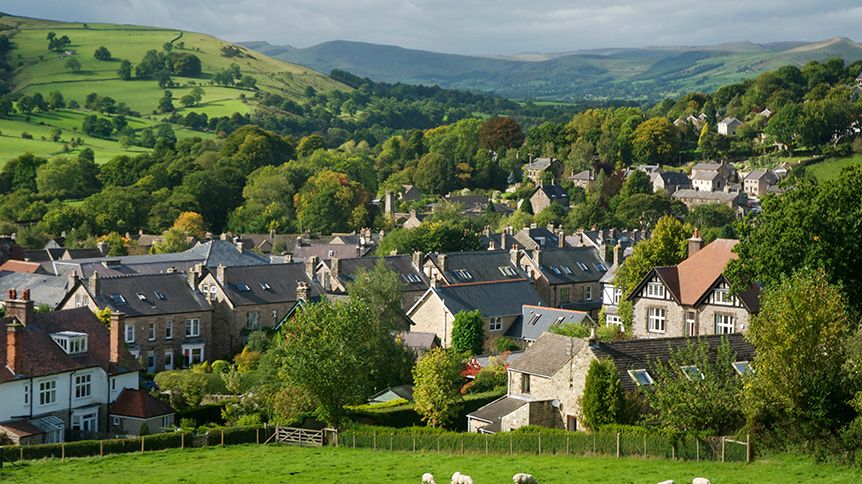 Derbyshire is a relatively cheap place to buy property compared to the rest of the UK. The average property price in the county is £205,000 as in December 2020 from 6,295 sales made in the previous 12 months.

The county suffered badly following the mining pit closures in the 1980’s and 1990’s leaving a large amount of unemployment, which is part still affects the region’s property prices to this day. But for relatively cheaper property prices, buyers can in fact get a lot of beautiful countryside because of the splendour of the Peak District and the Dales within the county.

In this article we will look at the 5 most expensive places to buy property in Derbyshire, counting down from number five to number one.

Making number 5 on our list is the spa tower of Buxton, which has an average property price of £243,000 from 175 sales made in the past year.

The town is very popular with visitors and is very close to the Peak District and contains St Ann’s Well which is a geothermal spring. Poole’s Cavern is located in Buxton which is a network of caves displaying very impressive stalagmites and stalactites.

The town has numerous historical buildings and is home to parts of the University of Derby. It also has its own railway station with good links to Manchester.

Matlock is located on the south east part of the Peak District and is the county town of Derbyshire. It contains its administrative headquarters as well as numerous other businesses and organisations within the town.

The town is also famous for a festival which it holds each year in July, celebrating music and arts and having various live performances.

Third place on our countdown is Ashbourne where a property on average will set you back £288,000, based on 186 purchases in the last 12 months.

Ashbourne is located on the southern part of the Peak District and has a population of 8,377 according to the 2011 census.

The small town has eleven pubs and 2 social clubs, so a good place to enjoy a tipple. Its main secondary school was founded in 1585, but the town unfortunately does not have its own railway station, the nearest one being 12 miles away.

Hope Valley comes in as number two on our list, where the average property price is £375,000 from 58 acquisitions.

This is a rural area surrounding the village of Hope in the Peak District. It is a popular destination for tourists especially as it is located on the Hope Valley railway line running between Manchester and Sheffield.

It has various primary schools and one secondary school. A major employer in the area is a cement factory in the centre of the valley operated by Hope Construction,

And the number one most expensive place to buy property in Derbyshire is the market town of Bakewell, where from 42 sales, the average property price is £424,000.

The town is known for its desserts and confectionary, including the Bakewell pudding and Bakewell tart and has a population of circa 3,949 according to the 2001 census. It is an attractive place for tourists and day trippers and has the popular venues of Haddon Hall and Chatsworth House Hi .